Today I was so busy with my work but fortunately I got a chance to see a brilliant game by Setiawan/Kido against Denmark men double on Badminton Semifinal. They won 2 straight set. Apparently, the number 1 men double were just too hard for those Denmark guys. I was…no…I am so happy to see them heading to Final. The game will be held tomorrow…God please help them!!

This morning, I almost lost all my hopes on Maria Kristin. She had fallen to go to the Final yesterday and this morning she had to compete against Lu Lan from China. Maria lost at the 1st game (11-21), I was devastated…but a miracle happened on the next game, she superbly defeated Lulan (21-13). On the 3rd game, the tense rising so high, Maria held on and won the game with 21-15. She made Lu Lan cried…hehehe (evil grin). Her rank is 21 and Lu Lan is 2, but she managed to beat Lu Lan, she destroyed all china medals in Badminton Women Single. I’m so proud of her even though it was only a bronze medal…but she had done all her best.

Around magrib, there were two games that I needed to see. Semifinal for mix double, there was Indonesia Team for each game. The 1st game was between Liliana Natsir and Nova Widianto against China. They lost at the 1st game by 15-21 but came back on the second game by 21-12 . The 3rd game was superb!! It was sooooo tight but fortunately it ended up with our victory, they score was 23-21. The next game was between Vita Marissa and Flandy Impele againts Korea. Once again (it seems like a tradition for this day) they lost by 9-21 and came back on the 2nd game with 21-12, but unfortunately they lost on the 3rd game by 17-21. I was hoping for All Indonesian Final, but it’s okay, they’ve tried their best. I’m hoping for the best tomorrow.

The tense rise to a high peak at night. It was the Final for Men Double between our pride Hendra setiawan and Markus Kido against Caiyuan and Heifeng from china. When the 1st game started, the Chinese are on the lead…and oh my god how they acted as if they are on the top of the world!! God how I hate those Chinese men…I mean, I don’t hate Chinese in general, only those guys who are such a fucking arrogant asshole…as if they are the best of the best that ever exist in this planet of badminton. I wanted Setiawan-Kido to win for Indonesia but after seeing those arrogant sons of bitches, I also wanted them to win so that they can wipe those fucking arrogant smile of Caiyuan and Heifeng’s face. Setiawan-Kido lost dramatically at the 1st game with 12-21. But they made a tremendous come back on the 2nd game, they beat Chinese with 21-11…and I’m so enjoying that moment…the moment when Setiawan-Kido shoved that fucking arrogant attitude up to their asses. At the 3rd game…I don’t care about them anymore…my attention lies to setiawan-Kido whom magnificently turns the table around and gave us gold medal… I was so overjoyed, I forgot to notice their score….what a wonderful gift they’ve given for Indonesian Independence Day!! They are the 3rd men double that have ever won gold medal in Olympic. 1st was Ricky-Rexy and 2nd was Tony-Candra. What an unforgettable moment, incredibly terrific game. The ceremony touched my heart, seeing our flag and hearing our national anthem was breath taking. And somehow it made my hatred over those Chinese washed away. Congratulation Hendra Setiawan and Markus Kido (^_^)/ and a big hug from me J 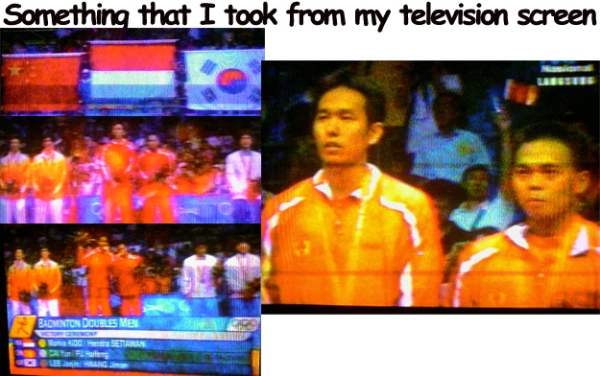 I gotta say that this moment can really lift up my nationalism.